Here’s a script for a presentation I gave in 2018 at UMN’s Undergraduate Mathematics Research Seminar (UMRS). I spoke about using generating functions to compute the expectancy of fixed points in permutations.

. The existence of a function

such that the expectation is

will follow easily. Now let’s get started on the main event.

Whenever we mention the cycles of an element in

we always mean the cycles in its unique cycle decomposition. We being with a definition:

returns the number of fixed points in

. That is, there is one element of

fixed point, and two elements with no fixed points. In particular,

is always a monic polynomial of degree

be a function on

so that we may attach a generating function to it. In particular, we have the following identity:

it’s easy to see that the coefficient of the

. Armed with this identity, we can prove the first of our aims.

Proposition 1: The average number of fixed points in a permutation on

Now notice that if we take the derivative of

, we have the average number of fixed points across all permutations in 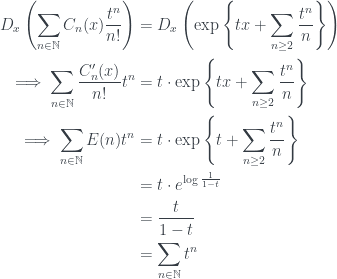 Here’s a quick example. We can list the permutations of

. Here we’ve included writing fixed points so they will be easier to count. After a quick glance, the number of total fixed points is

, the same as the size of

, so the expectation is

To prove our second result, we’re now going to need a generalization of

. This generalization will let us count the number of

-cycles across elements in

is the number of

Notice that in particular,

. The previous identity and Proposition 1 can be generalized for

and the proofs are just slight alterations. The analogous identity is

The generalization of Proposition 1 for

is the following, and is left to you to try and prove (you may assume the above identity is true):

Proposition 2: The number of

-cycles appearing in elements of

Looking back at our example, it can be seen that if we choose any cycle of length

, the number of those cycles appearing in elements of

. Now lets prove the existence of

. By our second proposition, these functions tell us there are

-cycles, etc., appearing in elements of

. But these are all the cycles which return the identity after the map since

. So the number of fixed points after the map is

Examples for Proposition 3 are easy to cook up, like the previous ones, and quite fun to check.