This is a presentation I gave for my Algebraic Number Theory class during the Spring 2019 semester. In it I prove the functional equation for the Riemann zeta function for global function fields of transcendence degree one.

The Functional Equation for Riemann Zeta Over Function Fields

-function associated function fields of transcendence degree one over

. As a consequence we will show that the

-function satisfies a rational function in

be a function field of transcendence degree one over

is the genus of

is the norm of

and making the substitution

to be the number of effective divisors

Now notice if we substitute

, the theorem is equivalent to showing

. To make the computations easier to work with we’re going to show the equivalent statement

. We will accomplish this by rewriting the sum on the left-hand side as a sum over divisor classes and using Riemann-Roch. Define

to be the set of all divisor classes

be the set of all divisor classes

. Then we have the following: 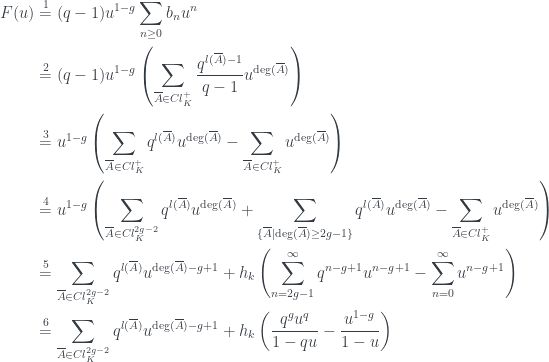 The first equality is by definition

is the dimension of

, really any representative, as a vector space over

term to clear denominators to get the third. Breaking up the first sum by degree

gives the fourth. The fifth follows since there are always

), and a corollary of Riemann-Roch which says that if

. Reindexing the middle sum to start from

be the canonical class. By a corollary of Riemann-Roch,

so that the map

is a well-defined involution. So in particular, is a bijection. Then

is a bijection, the first equality holds. We get the second as follows. Use Riemann-Roch thrice. The first two times use it for

, and combine results. This gives the change in power for

. The change in power for

is just Riemann-Roch again applied to

On the other hand, if we make the substitution

and we get the same result as above. This proves

. It’s a consequence of Riemann-Roch that if

. If we substitute this into

(we can manually check the case

). Collecting all terms under the common denominator gives the result. We now wish to find the degree of

and using the substitution

. If we take the limit as

and in fact its leading term is

. This rational expression for the

with simple poles at

is the number of primes of

of degree one. These facts are easy to check and we omit their proof.